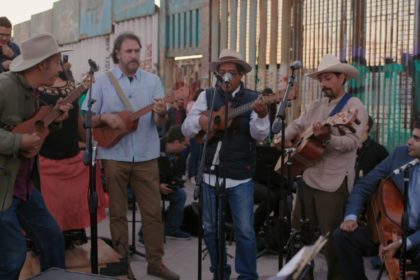 Fandango at the Wall

Dir. Varda Bar-Kar & Writ. Varda Bar-Kar, Kabir Sehgal
93 Mins | USA, Mexico
Fandango at the Wall follows Afro Latin Jazz Orchestra founder and conductor Arturo O'Farrill to the remotest regions of Veracruz, Mexico, where he meets and jams with the masters of son jarocho. Son jarocho is 300-year-old folk music rooted in the land that combines African, Indigenous and Spanish traditions. After Arturo's inspiring journey to a place where time seems to stand still, he and his orchestra join the masters of son jarocho at the border between the United States and Mexico for a son jarocho music and dance festival called Fandango Fronterizo (founded by Jorge Francisco Castillo). The festival takes place simultaneously on both sides of the United States/Mexican border transforming this object that divides to one that unites. With a poetic musical approach inspired by the son jarocho tradition, Fandango at the Wall reveals a Mexico seldom depicted, and delves into the current mass human migrations spurred by violence, poverty, and corruption.
Media Kit
Back to Events