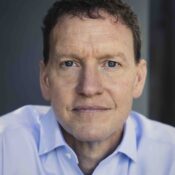 Join NewFilmmakers Los Angeles (NFMLA) for a conversation with producer Nicky Weinstock, who is currently Executive Producer of the AppleTV+ series Severance and has produced film and television for Apatow Productions, Chernin Entertainment, Netflix, Showtime, and more. We will discuss his career as a prolific producer, his work on the recent Apple TV+ show Severance, and his commitment to creating opportunities for emerging writers and directors with his new venture, Craft Services.

Nicky Weinstock is the founder and president of Invention Studios, an independent production company developing a wide range of features and television shows.

Weinstock began his career in New York City as an editor at Random House and Riverhead Books, and then as the author of a nonfiction book and two novels, before moving to Los Angeles to work at 20th Century Fox Television. Upon leaving Fox, he ran Apatow Productions with writer/director Judd Apatow, where he produced movies including Forgetting Sarah Marshall, Step Brothers, Pineapple Express, Get Him to the Greek and Bridesmaids. He went on to help launch the production company Chernin Entertainment alongside Peter Chernin, and for the past six years to partner with actor/director Ben Stiller and serve as the creative head of their company Red Hour Films. In 2022 he shifted full-time to running his own company, Invention Studios.

His company, Invention Studios, has a television financing deal with Fremantle, and is producing both shows and movies for HBO Max, CBS, Amazon, Amblin, Paramount, Apple, Film One in Nigeria and other studios and networks across the world.