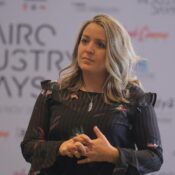 Join NewFilmmakers Los Angeles (NFMLA) for a conversation with Shari Page, Program Director at the Half Initiative, about the Director Shadowing Program at the Half Initiative, a mentorship initiative created by Ryan Murphy to make Hollywood more inclusive by providing mentorship opportunities for women, BIPOC, LGBTQ people, and minorities behind the camera. Shari will discuss the Half Initiative and the Director Shadowing Program in particular, which places each mentee director on a Ryan Murphy production to shadow directors on a single episode, as well as providing access to panels and networking. Shari will speak about the program and answer audience questions.

Shari Page is the Program Director for Half Initiative, launched by Ryan Murphy aiming to make Hollywood more inclusive by creating equal opportunities for women, BIPOC and LGBTQ+ people behind the camera. Prior to Half, she worked at Film Independent as the Senior Program Manager for Global Media Makers, a mentorship and cultural exchange program in partnership with the U.S. Department of State’s Bureau of Educational and Cultural Affairs, designed to foster relationships between American and International filmmakers. She consulted for Annapurna Pictures in their effort to build mentorship programs to serve underrepresented filmmakers and support The Vidiots Foundation by writing grants and producing fundraising events that included VR events in collaboration with Chris Milk (Withn).

Previously she also worked with Outfest – facilitating the Screenwriting Lab, panels, networking events and is most proud to have created and launched OutSet: The Young Filmmakers Project from Outfest Film Festival and The LA LGBT Center, an annual yearlong film lab in LA for LGBT youth. Shari got her start in Hollywood working for five years with award-winning casting director, Felicia Fasano, notably on the Golden Globe winning series, Californication for Showtime. Shari holds a Bachelor’s in Education from Southern Illinois University, previously taught middle school and coached basketball in Chicago and holds an MFA in Film from Columbia College Chicago.